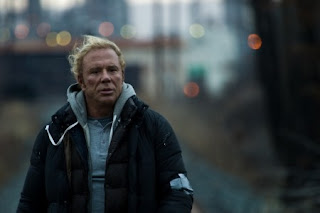 I wrote an article a while back about 10 differet uses for Velcro around Ottawa. It was coming up on the anniversary of George de Mestral's invention, and I wanted to pay hommage to the brilliant fastning whose name is a combination of the words "velour" and crochet". The list included keeping hard drives in order at the SAW Video Cooperative to a discreet rental system at the local adult video store.

The foreunner of the "top ten uses for" type of "home hardware" journalism is duct tape. Watching THE WRESTLER, I was fondly reminded of a classic use: repairing the puffy jacket.

Not that the film is a period piece, its just that Mickey Rourke's character is stuck in time. The script portrays this so elegantly, with his Nintendo 64, lack of cell phone, and the elementary school photo of his daughter with out-dated phone numbers crossed out on the back.

It's been a while since I've seen a costume sum up a character so tenderly as that dilapidated jacket. Thinking about it makes me misty for Randy "the Ram" all over again.
Posted by film is fashion at 15:48